Friday was feral hot. In Melbourne the maximum temperature reached 33’C (91.4’F) in the shade. I woke up to the smell of dust in the air. Indeed, the entire house smelled of dust. That dust was the top soils blowing away with the wind from some unknown source far from here. And in some cosmic joke the maximum temperature here on the same day – in these supposedly cool mountains - reached 36’C (96.8’F) by late afternoon before rapidly cooling down again for the evening.

There was talk that day of plans to continue filling the firewood shed with cut and split timber. Nature has done a great job of drying the firewood this year, so it does seem a bit of waste not to store it away for the winter! The realities of the weather intervened and those plans were shelved, and so the editor and I headed off the mountain range to undertake a whole series of errands that are required to be completed in order to keep the smooth sailing ship that is Fernglade Farm afloat! At this point I do feel it necessary to disclose that one of those errands did involve ice coffees which are an important part of adaption to hot weather.

Unfortunately, it wasn’t all fun though as one of the errands involved picking up replacement glass – which had been on order - for the glass window in the wood fire box. The bloke in the local glass shop made the laconic observation to me that: “it was a strange day to be repairing a wood heater”. No doubt that he is correct in that observation.

To get an idea about just how strange the autumn weather has been I ripped a few statistics off my favourite Internet local weather site: Weatherzone Melbourne

And it is worth noting for those that are numerically inclined, that for the next week not one single day is predicted to be below the long term average temperature.

Later that day it was a wise option to work in the shade that day and so I did. Long term readers will recall that about a year ago I undertook repairs to the wood heater. Most of the repairs have worked well, however some new items of maintenance were required before the wood heater could be used this winter. I mean, it may actually cool down here? Maybe?

Observant readers will note that in the photo above there has been an application of some black goo which is a very high temperature putty. That putty was used to replace the high temperature cement that I used last year which had since collapsed in some sections. I’m trialling the putty to see which material has the longest life in such a harsh environment. You can also see that the fire bricks on the left hand side are only a year old and looking quite good, whilst the more crumbly fire bricks on the right hand side are about six years old now and will probably have to be replaced next year along with the steel that holds them in place which is also showing quite a bit of damage.

The glass in the door to the fire box had also cracked and a small section was in danger of falling out. In addition to that damage the fibreglass rope which seals the door and stops exhaust gases from escaping into the living room had broken and was in need of repair. Stopping exhaust gases from a firebox from leaking into a living room is probably a good thing! 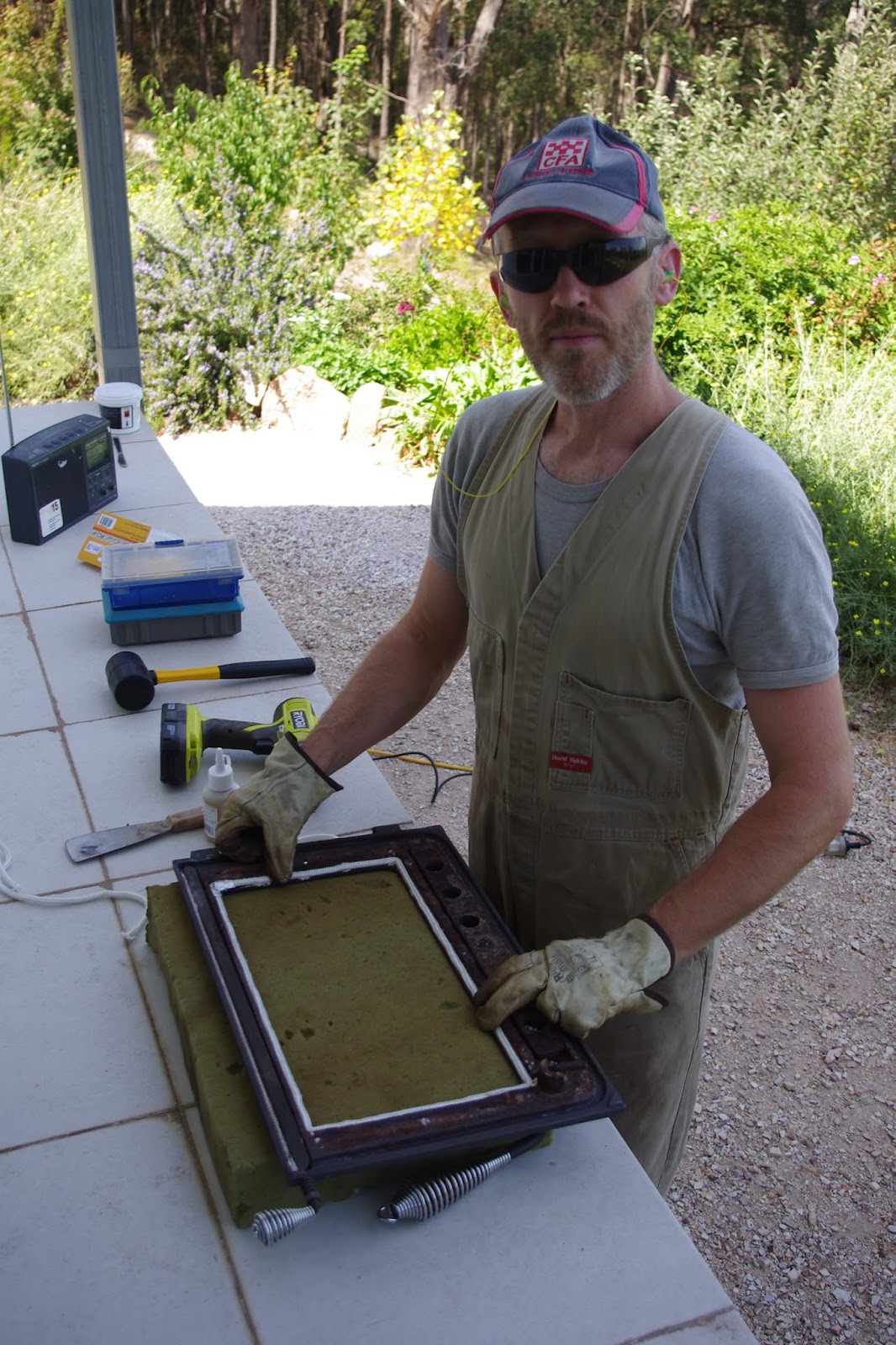