Back to Aquaponics and Aquaculture Perennial Garden

Posted by John Stevenson about 5 years ago 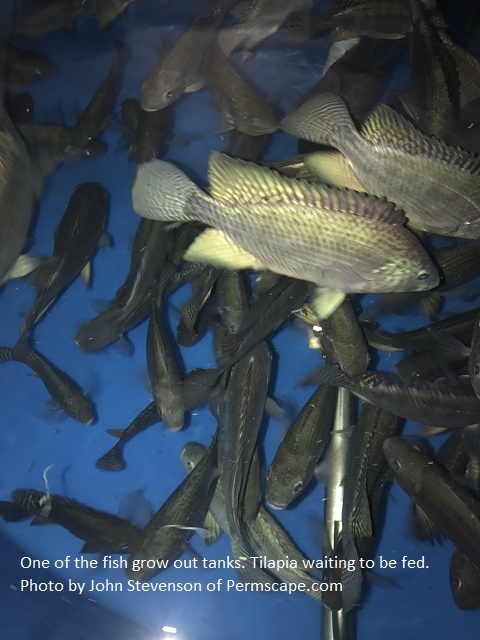 In our aquaponics system air lifts are responsible for transferring the larger solids from the fish tanks into the settling basin. The entire aquaculture/aquaponics system is powered by one external 64 watt air compressor and gravity which continually moves more than 1000 gallons through the basin at a rate of approximately 3 gallons per minute. 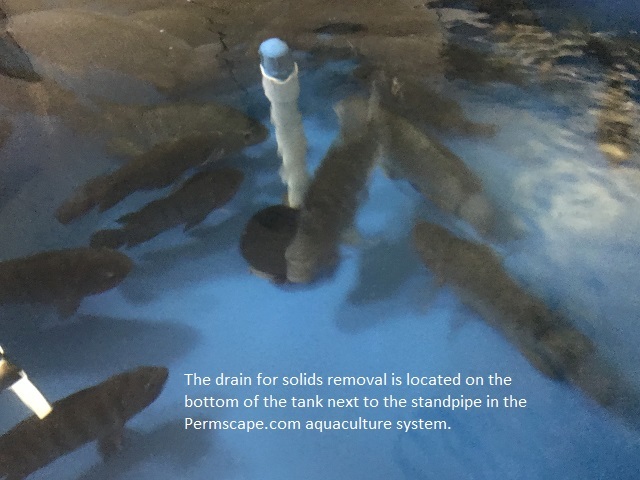 Air lifts are not new. Under gravel filters and other forms of air lifts are regularly used in the aquarium hobby. Modern sewerage treatment plants also use these systems. These designs owe their existence to work of engineer Carl Emanuel Loscher who inventing air lift technology in 1797.What does a simple DIY airlift design look like? 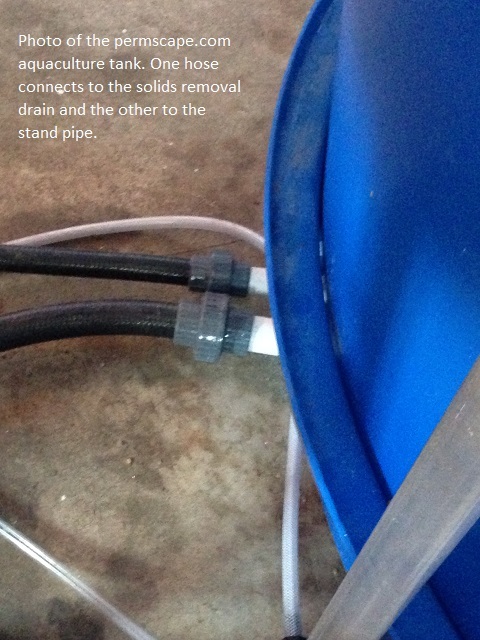 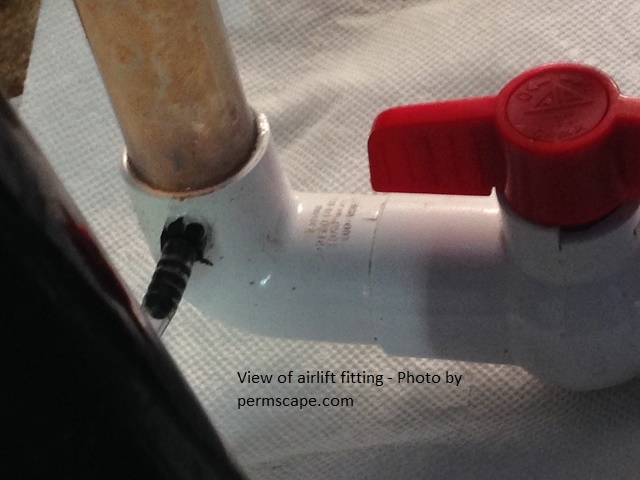 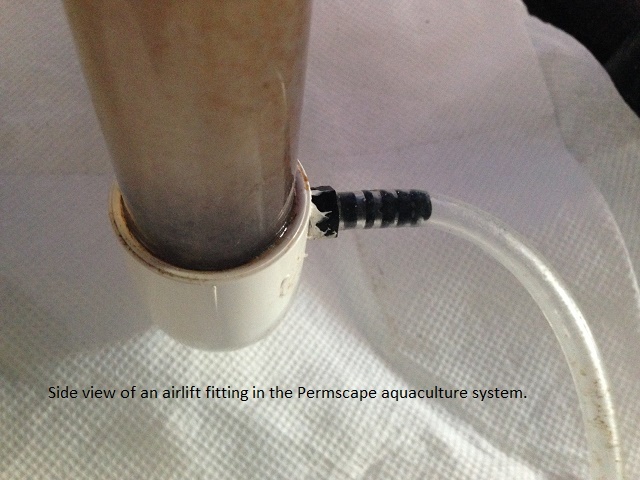 This pipe is connected to a “T” fitting. One end is sent to the settlement basin through a bulkhead. The horizontal end is extended above the basin and topped with a cap fitting that had a small hole drilled into the center. 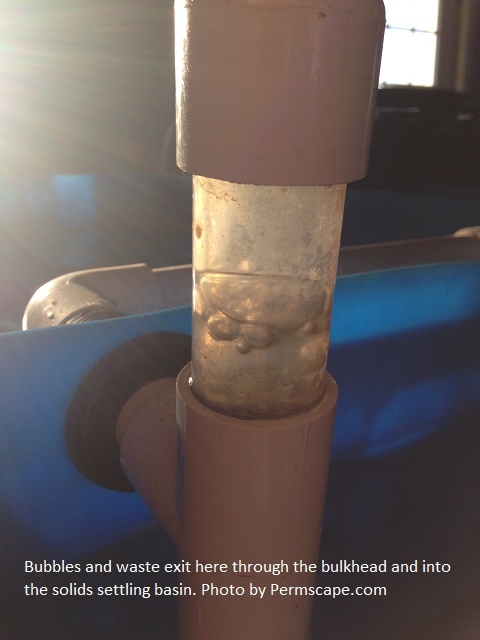 The larger solids settle in the basin. The remainder of the water flows over a weir and into a drain which is piped into a bio filter. 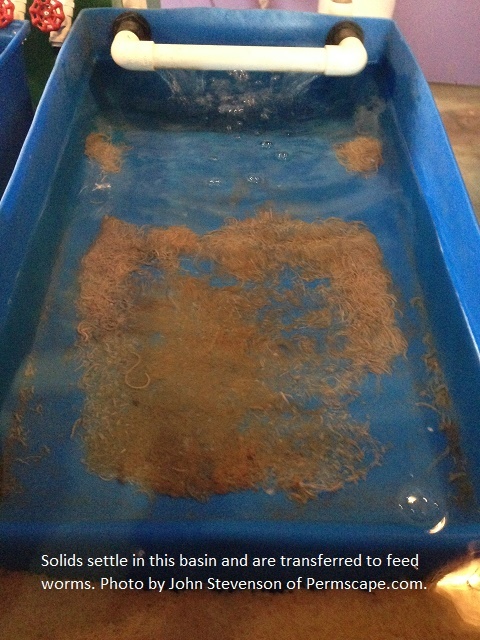 Gravity continues to move the water. It flows through a pipe on the floor back to the tank through a hose. There is a shut off valve inline to allow isolation of the tank. An air lift inside the 90 degree elbow on the floor moves the water to the aquaponics system (located above the fish tank) or returns it directly to the tank (when the system is decoupled). 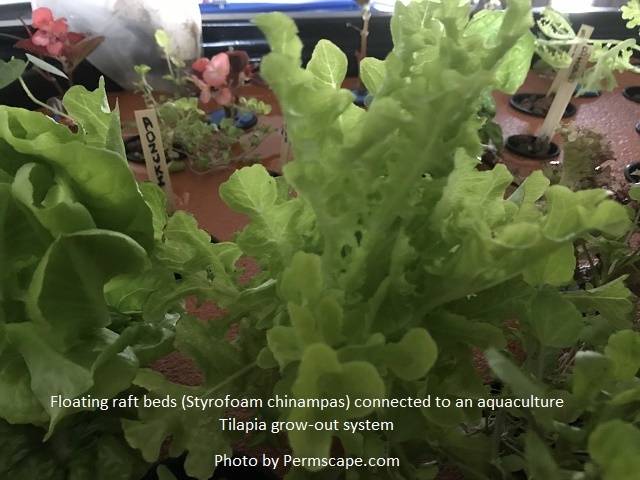 The flow to the settlement basin is stopped by the inline shut off valve coming from the tank. The settled solids in the basin are drained through a pipe connected to the bottom of the settlement tank. It has a shutoff valve also and is located high enough to easily fit a five gallon bucket below. 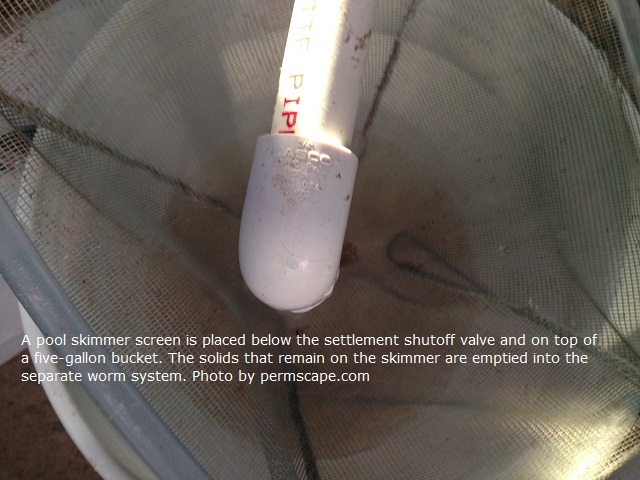 The worm system is a series of totes containing composting worms, shredded paper/cardboard, rock dust, and crushed eggshells. The fish waste is placed into the bins and covered with shredded paper. 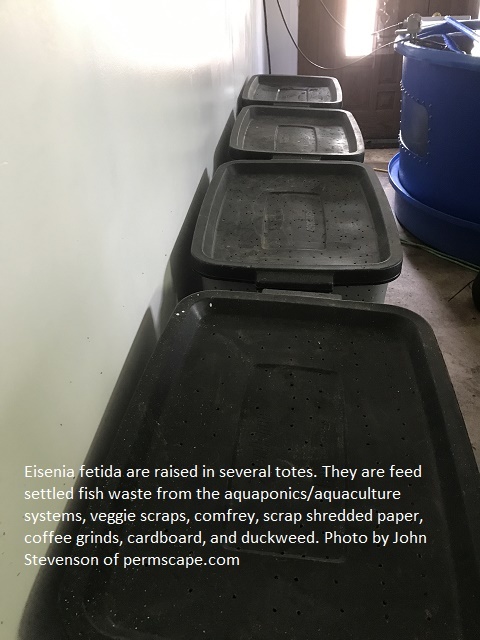 Fish waste is transformed into valuable worm castings and an ever increasing worm biomass. The castings are also made into a worm tea which is fed back to the aquaponics system. 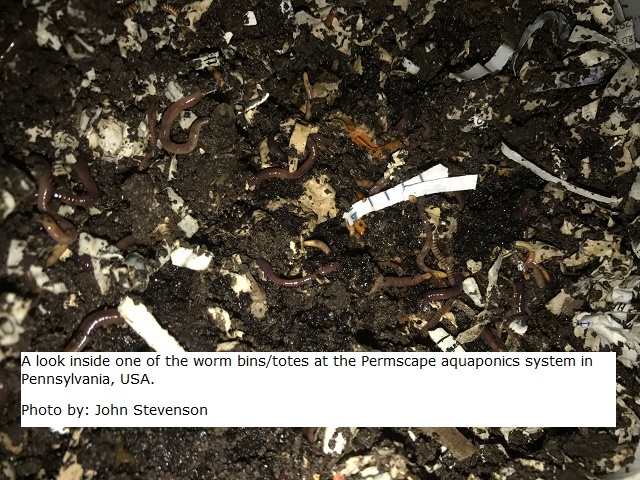 Castings are also formed into soil blocks. The blocks are the heart of our sustainable nursery. Plants are germinated and grown from collected seeds. 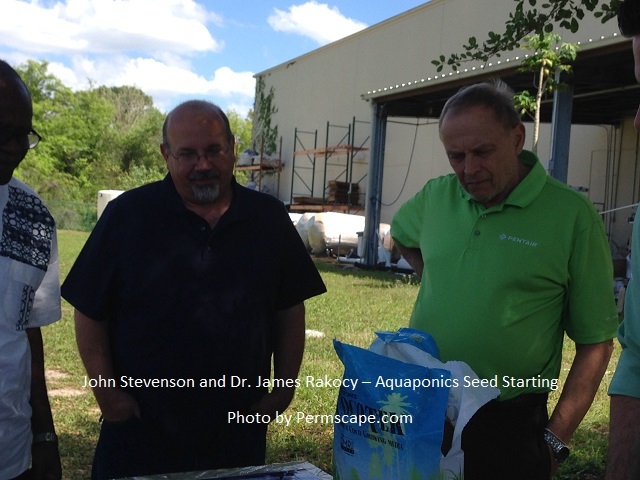 Many ask us if we feed the worms back to the fish. Yes, we occasionally feed surplus worms back to the fish. The truth is composting worms are an incredibly valuable resource. Fruit, vegetables, leaf meal, fish fry, algae, duckweed, azolla, and various bugs are a much better fish food option. These inputs are intentionally grown in the system to add the diversity and complexity necessary to achieve an integrated living ecosystem.

Some solid accumulation is actually good for your plants.

Mineralization facilitates the release of important inorganic nutrients. This process typically takes place in tanks, located in line, before the sump. Ours are filled with bird netting.

We have installed a worm tea brewer in our aquaponics system that runs constantly. The worms process the fish solids that normally would have made their way to the mineralization tanks. After the worms and microbes “do their business” the castings are added back into the system brewer.

Our results, though admittedly antidotal, demonstrated better plant growth in the system using the worm tea brewer. It was compared against the other system (AQ-1) which did not have a settlement basin. AQ-1 uses a solid lifting overflow swirl filter located in a constant height one pump tote system. The smaller solids travel through gravel media and into two mineralization tanks located below them. There is no settlement basin in AQ-1. Solid waste remains in some form in the system. Composting worms in the grow beds of AQ-1 process the fine solids. These worms are likewise creating castings. However, for whatever reason the growth is better in the system brewing worm tea. We have many thoughts on why this is happening. The other advantage of the settlement basin is the creation of soil for other purposes. The worms reproduce much faster in a separate system and process not only fish waste but also the scraps from pruned plants in the system.