Did you hear that rustle in the garden? What could possibly be lurking in there? There are plenty of large, overgrown and menacing-looking plants poking their leaves out from that mass of vegetation. And they're all hungrily seeking out the sun. Hopefully, I never encounter a Triffid (a fictional tall, mobile, prolific and highly venomous plant species) in the peaceful surrounds of Fernglade Farm as they seem to be extremely aggressive and also highly poisonous. A Triffid in the garden would certainly make for very poor company. What was that noise? I’m almost certain that I heard a rustle in that garden bed! What could it be?

And never mind that noise you heard
It's just the beasts under your vegie bed
In your kitchen, in your head.
(with apologies to Metallica)

Way back in time when I was a very young child, worrying about monsters hiding under the bed or in the cupboards seemed like a reasonable concern. It was worth peering under the bed before the lights went out as you would never quite know if there was an actual monster hiding under the bed. It probably didn’t help that my pet cat used to sleep on my bed and she was constantly up to mischief and certainly wouldn’t have hesitated stashing her latest kill under the bed. That cat also exhibited a certain disdain for computers as I distinctly recall waking up one night to sparks leaping from the power supply for the trusty old Commodore 64 computer, because she had decided to urinate on it! It is worth mentioning that she didn't try that particular trick a second time.

I was rather fond of that cat and despite all of the mischief and adventures, she lived to a very old age. It wasn’t all fun and games though, as she used to keep her own hours and wouldn’t hesitate waking me up in the middle of the night so that she could have a run around outside and get up to whatever feline mischief cats get up too. She was a little monster herself! That cat was rather fortunate, in that my bedroom in those days was a rather sturdy old shed in the backyard of the house. In the 19th century that shed was most likely the old wash house. Seriously, for me (and the cat) that was the absolute best situation, because I could keep my own hours as well and head off with friends into the night to get up to whatever mischief that teenagers used to do back then. Honestly, from hindsight it appears that I’d been heavily influenced by one very naughty cat!

Nowadays, I’m far more sophisticated. No one seriously believes that there are monsters hiding under the bed. That’s because everyone knows the monsters are hiding in the garden!

The other day, the editor began harvesting the zucchini (also known as a courgette or marrow in other parts of the world). It wasn’t until the editor brought the third arm load of zucchini into the kitchen that I cracked the sads and said: “Not another lot of” (insert choice expletive here) “zucchini!” But the zucchini kept coming in the door. Those fruit are monsters as some of them are 0.7m (2.3 feet) long and they are really quite weighty.

Over the next six months those fruit will be converted into useful things like human, dog and chicken feed. Plus we will save some of the seed for raising new plants next summer. But until that fruit is completely consumed, I have a dozen massive zucchini monsters taking up most of what was left of space in the kitchen!

The other monsters this year seem to be the tomatoes which are now being bottled with a pinch of salt using a hot water bath (also known as canning). Over the next few weeks, we may even try preserving the tomatoes using a similar process to that of jam making.

Anyway, the kitchen has finally reached critical mass and we have completely run out of storage and benchtop space. The solution appears to be to expand the number of the kitchen cupboards and preparation space. That process will begin over the next few days, but til then stay tuned and seriously, be careful people, watch out for monsters! 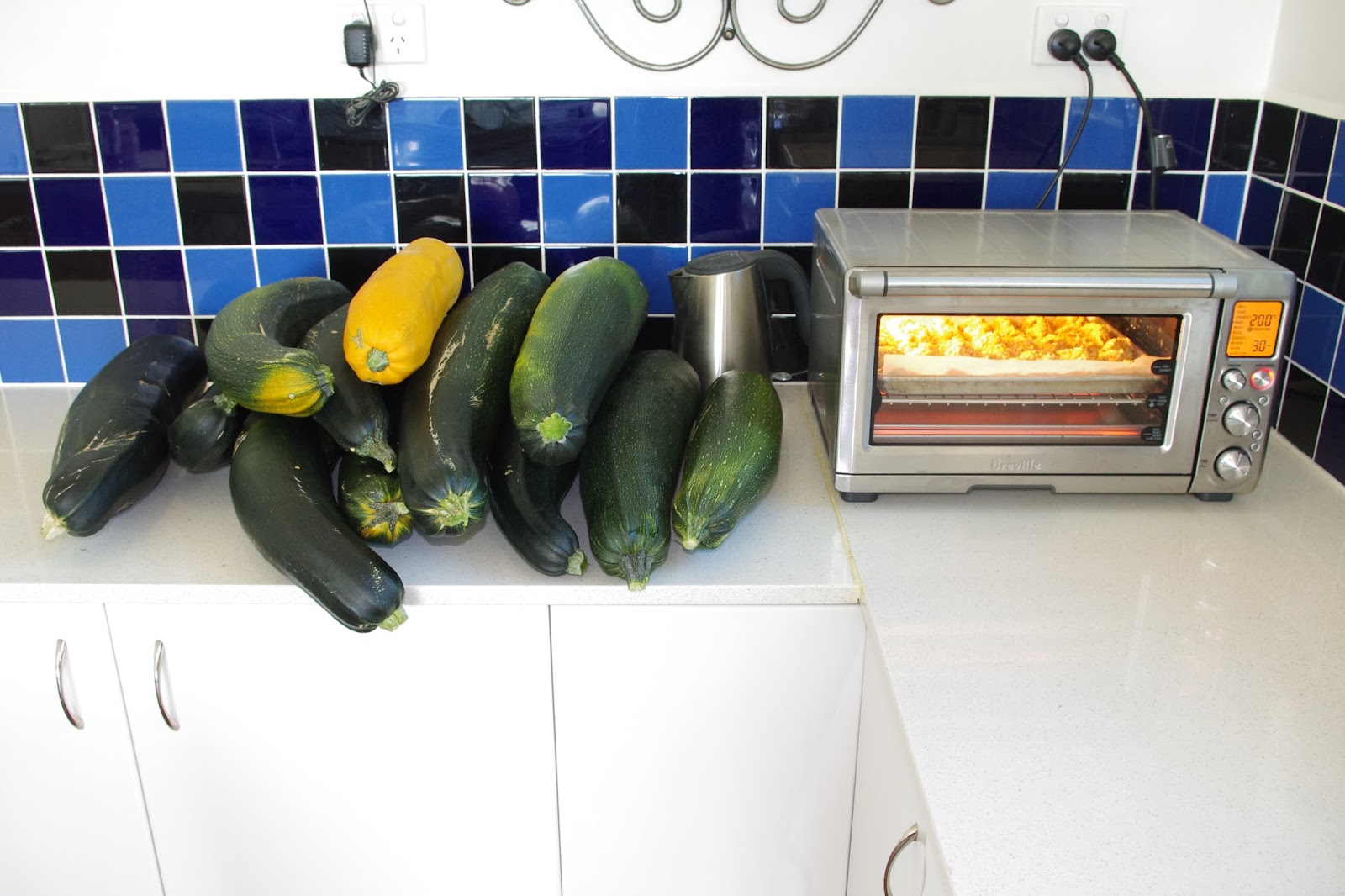