Back to DESC Desert Food Forest

Creating Ethical and Organic Soil in the Desert

Posted by Gaina Dunsire about 9 years ago

The more I learn about soil the more I realise how little I know and perhaps still do not grasp its full complexity. In some ways it seems far too scientific and outside my academic comfort zone.  However, at the same time, soil has begun to fascinate me and reminds me of the first time I put on a snorkel and tentatively put my head under the water. There before me was a whole new world, waiting to be explored, full of amazing creatures and life forms I had never seen first-hand before. Humbling, yet exciting.

As Elaine Ingham has observed, to most people soil is just dirt which needs cleaning off our shoes. Or at most, it is a brown sticky stuff for plants to grow in which takes ages to get out from under our finger nails. Yet the fact that we know so little about it, for me, is part of its appeal.

Soil fertility is evidently central to life on earth and therefore crucial to any land-based Permaculture project. It is clearly a subject worthy of considerable attention to a novice, or even the more experienced Permaculturalist.  With regard to my own project, the challenge I had was creating enough soil to fill 560 cubic metres of empty concrete amphitheatre. Whilst my recent experimental composting efforts were a fun and valuable learning experience, they were clearly not going to be sufficient. I was going to have to look elsewhere. This blog will focus on my first ingredient; sand.

The terms ‘sweet soil’ and ‘sweet sand’ seem to be used interchangeably in the UAE for two different sources of soil. The first is what I shall refer to as sweet soil, whose origin is a dry river bed or Wadi. It contains a number of minerals, is less alkaline and has similar properties to clay. Using sweet soil would no doubt be a good component for creating soil, but I could not help but picture several JCB’s obliterating what are already very fragile eco-systems, simply so I could create a garden in the city. It did not sit comfortably.

My next option was sweet sand which can be found in a number of areas in the UAE and usually lies several kilometres inland from the coast. Unlike the city of Dubai, the sand in these areas is not full of crushed shells and coral, nor is it as alkaline. Sweet sand is very different, even to the naked eye. A drive inland towards The Empty Quarter will take you to the Emirati’s natural weekend playground; a range of sand dunes, including an enormous dune, affectionately known as ‘Big Red.’ Here, as far as the eye can see and beyond, the sand is no longer a yellow-grey, but a burnt-ochre red. It contains iron-oxide, hence the colour, which plants appreciate as well as the lower alkalinity.  Although this sand is still coming from an eco-system in essence, there is an awful lot of it! Its ‘consumption’ is controlled by the government and anyone wishing to use the sand is required to apply for a licence, stating exactly how much you are taking, what it is for, and where it is going. 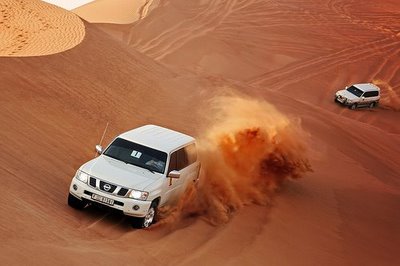 The Wadis can sustain a relatively large amount of life and should be protected or managed sustainably to produce food (see Bill Mollison’s A Designers ManualCh.11). Whilst transporting sweet sand isn’t ideal, the flora and fauna these dunes are currently supporting is considerably less than the Wadis, especially as many dunes have been grazed by goats and camels for centuries and more recently subject to 4x4’s ‘dune-bashing.’ Therefore they no longer have the delicate fungal-algal-lichen crust which would ordinarily hold the surface of the sand dune together, preventing erosion and allowing succession to begin. The Empty Quarter is not named as such without good reason, so taking a tiny percentage of it to create a forest garden which has already increased awareness of Permaculture in the UAE, was a decision not taken lightly but one I decided to make.