Back to Kim Hill's profile

Posted by Kim Hill about 9 years ago

The first Adelaide Reskilling Festival was a free, self-organising event that gave the community an exciting exchange of skills for resilient communities, as well as a swap meet of food, seeds, recipes, clothes, toys and more.

Where can you learn to make bread, juggle, use online networks, knit, play music, cook in a cob oven, conserve endangered plants, use a spinning wheel, keep bees, convert a diesel vehicle to run on vegetable oil, communicate compassionately, ferment food, raise a nappy-free baby, and lots more, all in one day, and all for free?  At a Reskilling Festival! 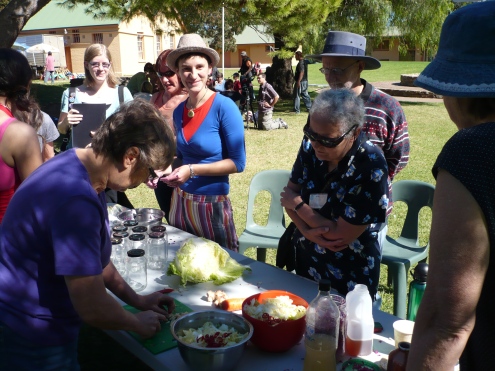 The first Adelaide Reskilling Festival happened on Saturday April 16 2011 in a beautiful park at Glandore Community Centre.  In addition to the activities listed above, there was a music performance, community garden tours, capoiera dance workshops, and a skills marketplace activity.  The Friends of the Earth Food and Farming Quilt was stitched together and displayed, children created a multi-coloured brick road with chalk, grown-ups had their faces painted by children, Food Not Bombs cooked up a free vegetarian lunch, and permaculture books and fruit trees were on sale.

And then there was the Great Swap Meet: unwanted clothes and toys were brought and strewn in an orderly fashion over a few tarps amongst the shady trees, for passers-by to rummage through, try on and help themselves to.  There was a produce swap and a seed swap, recipe sharing and information sharing, and a few preserves and miscellaneous items came along for the ride.

Reskilling is learning the skills we need to build resilient communities. These are skills that our grandparents would take for granted, but many have been lost as the process of industrialisation progresses.  Reskilling involves learning from each other, and we build community networks and have fun in the process.

I had the idea of a Reskilling Festival after being asked by Transition Adelaide West to suggest topics for reskilling workshops, and people who could present them.  I saw a festival as a way for a community to share skills without a committee having to organise it, and without requiring the people who regularly volunteer their time to present these workshops, who then come to be seen as the only ones who can teach these skills.  I made a point of not requesting anyone to run an activity, but instead inviting people to be involved. This meant that everyone participated because they wanted to, not because they felt obliged to.  And I found that the skills that were offered were quite different to what I was expecting.

Some of the activities were programmed in advance, and others happened spontaneously on the day.  There was a program board on display, with space for activities to be added.

The event was organised at minimal cost, and with minimal effort.  The organising was largely done by people who offered to present activities, so it didn’t take much to pull it all together.  Total cost was around $10 in phone calls, $5 to photocopy a few flyers, and $10 to be officially insured for the sake of official council regulations.  So it was all official.  There were some official forms I was asked to fill in too but I didn’t bother with those.  City of Marion provided free publicity, use of the venue, and lots of tables and chairs. 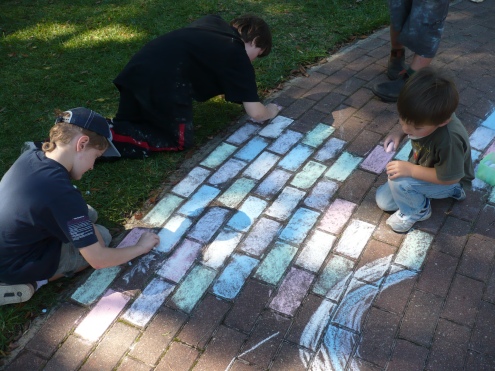 Reskilling Festival is an example of a gift economy, in which goods and services are offered freely, with no expectation of receiving anything in return.  Everyone contributed in different ways, possibly without even being aware of it, and everyone (hopefully) gained something from their involvement.

I made a website with information about the concept, program, venue, the swap, what to bring, how to help, and a two minute film made by Andrew Yip to promote the festival. 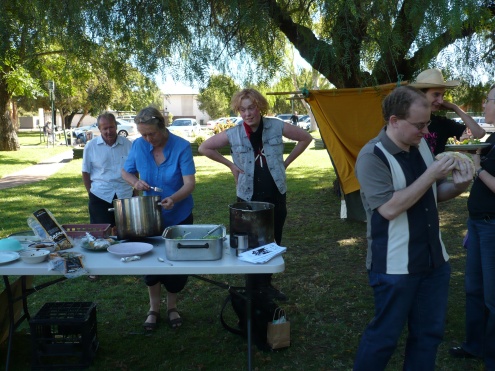 The festival was intended to appeal to people from a range of cultures and ages, and give everyone opportunities to engage with each other in ways that they wouldn’t usually.  There were punks, old ladies, children, Brazilian capoiera dancers, community gardeners, techie-geeks and musicians.  Everyone learned from each other, had lunch together and washed their own dishes.  Then drew on the dishes in the skills marketplace session and washed them again.

Some outcomes of the Festival: a fermentation club has begun holding regular gatherings, meeting at each other’s homes to share skills around food fermentation.  A number of people have taken up making their own bread and sauerkraut.  A comment appeared on the website from someone in Shoalhaven NSW, intending to run a similar event in their town.

A woman phoned me a couple of days after the event to say that she was having such a good time at the festival that she would have preferred to cancel her afternoon engagement and stayed for the whole day, and felt the need to phone to let me know how much she enjoyed it.  There were requests for it to happen again.

A short film was made to showcase the festival, by the wonderful Andrew and Miriam Yip of ESMedia, who have made films of many community groups and events in Adelaide over the last year.  See the film at reskillingfestival.wordpress.com.  There are photos and more information about the event on the website too. 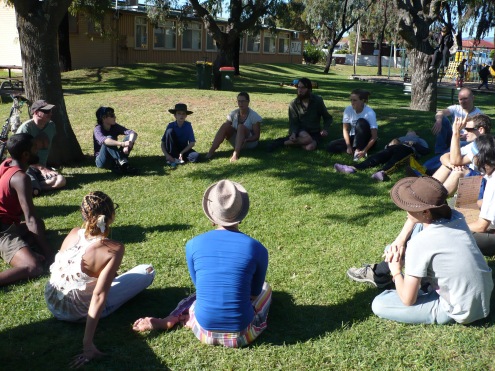 There are lots of possibilities for the future of the concept.  I’d like to see it become a more localised event, so that people can get to know their neighbours and experience the wealth of skills in their local communities.  It can become a regular occasion, with different skills on offer each time.

It doesn’t take much to organise a Reskilling Day in your area.  All that’s needed is to set a date and a place and invite people.  Make a few signs and a program if you want, cardboard and a texta is all it takes.  A website and a facebook event page can help with promotion, but the best way is always by talking to people in person.

Tamara Griffiths : awesome awesome - so many familiar faces!
Posted about 9 years ago
My Badges