Posted by Ute Bohnsack about 8 years ago

Stinging nettle is one perennial plant we have more than enough of on our smallholding. It likes damp soil - a constant in the West of Ireland - and elevated levels of phosphate and nitrogen which it finds in and around livestock paddocks and wherever significant amounts of nutrients accumulate such as near compost heaps or underneath nitrogen-fixing trees such as alders and alongside hedgerows.

I used to merely tolerate it in some areas as it is an important foodplant for the larvae of several butterfly species, with the Small Tortoiseshell and European Peacock being fully dependent upon it. But then I realized just how nutritious this plant is and that it can be recycled into an excellent feed supplement for our chickens. Some old poultry books make reference to using nettles as a feed supplement and indicate improved health, more eggs, larger eggs, and better-coloured yolks. But even though nettles grow in the chicken runs, the birds very rarely touch them, even if there is nothing else green left for them to pick, presumably because of the stinging hairs.

Boiling however tames this defence mechanism, as anyone who has eaten nettle soup or nettle puree can confirm.

So here's a quick way of making nettle "spinach" that can be incorporated into your chicken feed.

Put on a pair of tough gloves and strip the leaves from the bottom of the stalk upwards; the soft tip will break off. Don't use the tough part of the stalk as it will be hard to puree the tough fibres. 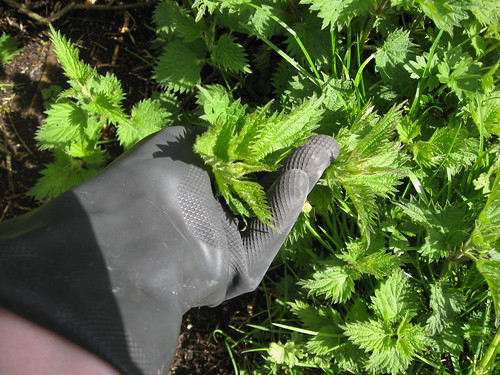 Fill a suitable container that can take boiling water. I usually fill the container below, tightly packed, resulting in about a pound of leaves and tips to add to the feed for around 50 birds. It only takes a few minutes. 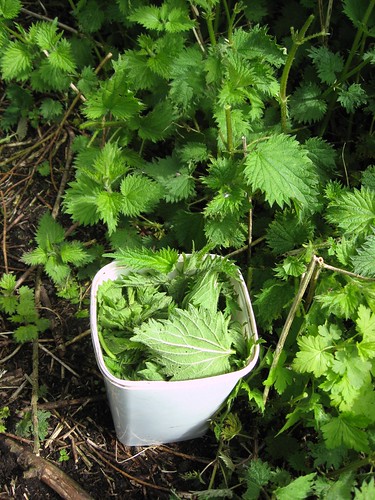 Fill the container with boiling water and let it sit for 5-10 minutes at least. 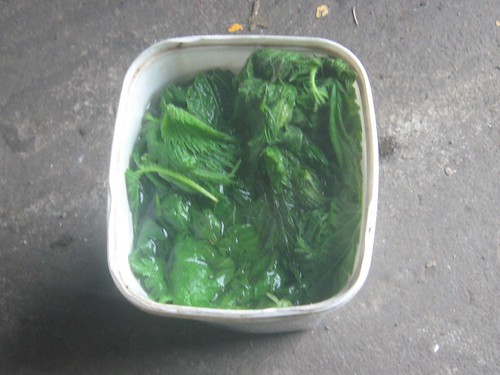 Using a stick blender blend until it resembles a course puree. CAUTION: I ruined a 400W stick blender (well, maybe I didn't and it would have broken anyway but it gave up when I was making this feed) so I moved on to a 700W one. It might also be possible to break the nettles down using manual implements such as those used for making wheatgrass and adding boiling water after but I have not tried that. 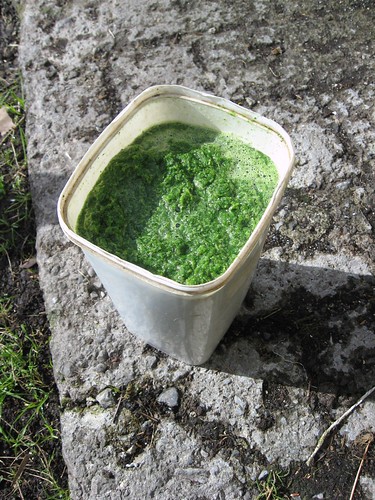 Add it to the ration. I mix it into the morning mash of organic pellets and wheat. 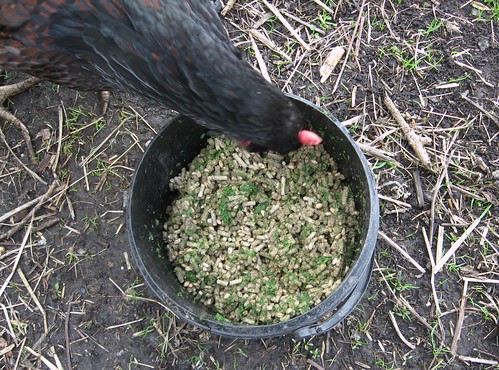 It gets Clara's approval. ;)

So what benefit do the chickens derive from nettles? Here is some nutritional info gleaned from the net (my emphasis).

"Nettle is nutritionally high in vitamins A, C and D, also minerals iron, manganese, potassium and calcium. It contains 21-23% crude protein and 9-21% crude fibre.
As a feed component the quality of nettle plants is valuable. At the vegetative stage plants contain 4% protein and fibre, 50 microg/g carotene, 4 microg/g riboflavin and 10 microg/g vitamin E. By incorporating nettle into poultry feed it is possible to increase protein intake by 15-20% and vitamin intake by 60-70%, also green feed requirements can be reduced by 30%."

It is of course also possible to dry nettles when they are in season and save them for the winter and indeed nettle hay is also a valuable feed supplement for other categories of livestock.

But don't forget to leave some for the butterflies.

Tabatha Brackstone's Moon Worshipper's Garden. : Thank you for sharing this information.
Posted about 8 years ago

Tim ONeill : Hi Ute- Great article! I would like to chat with you about re-purposing it for EcoVillage Magazine but I cant see how to contact you. I am a newbie here. Anyway if you would not mind us publishing it in the magazine please let me know. We reference you as the original author of course. Thanks for letting me know. -Tim ONeill [email protected]
Posted about 8 years ago

Fiona Clubb : Hi Ute. We have Highland cows and they adore nettles. When put onto fresh pasture they head straight to the nettle patch, ignoring the grass. Now I have to protect the nettles for the butterflies.

Enjoying reading about your smallholding.
Posted over 5 years ago