Back to Purple Pear Farm

The thirty fruit trees that are part of the Mandalas have a guild including plants and herbs to help them be the best they can be.

There are many fruit trees among the beds of the mandala garden. We have around thirty as part of ours and this is a sizable orchard in it's own right let alone as part of the garden.

The fruit trees generally are placed in the space where the mandalas touch each other, in the corners where they meet. 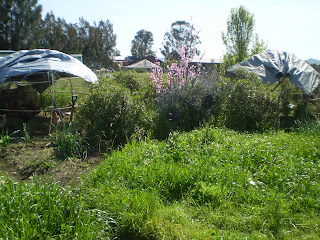 The picture above shows the two domes in the background and the weed-filled circle in the foreground. This highlights the junction between the three mandalas and the Nectarine is blooming in the space between the mandalas.The North (Sun) side of the garden has the deciduous trees such as pear, apple, peach and nectarine and the South (rear) of the garden is planted with Citrus as they are evergreen. This is to allow the Sun into the garden in the winter and to afford the plants some shade in the summer. 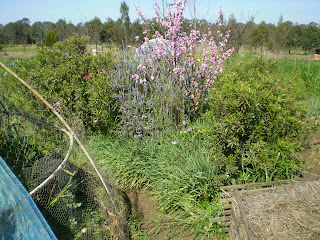 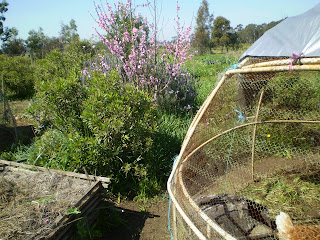 The trees are not alone but are planted with an under-story as part of the guild the supports the tree. Lavender grows close to the trunk of the fruit tree to deter borer as it winds its way through the lower branches. Garlic Chives disguise the presence of the fruit and affect fungal problems too. Yarrow and Tansy are used on various trees to support the specific problems encountered by the tree. For instance the Tansy near a Citrus will deter ants that trace honeydew from scale and cause sooty mould in oranges and the like.
The three sides of the tree are accompanied by a dwarf Nerium Oleander to provide over-wintering for beneficial insects such as lady-beetles and predatory wasps. Acacias can do a similar job but with the added advantage of fixing nitrogen and providing mulch through chop n drop. 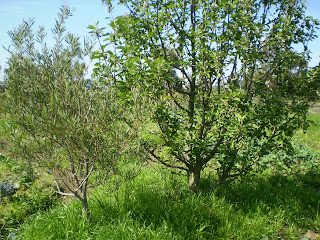 This acacia supports the apple tree.Another important part of the guild is the habitat for the beneficial creatures. Little birds sheltering in the branches leave dropping to support the trees growth and eat some insect pests too. 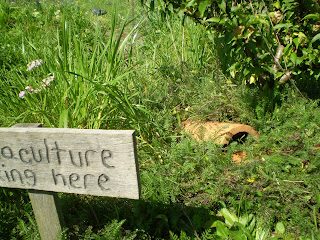 Terracotta pipes provide a home and a place to sun-bake for lizards.

A guild may be described as "an harmonious interaction of elements within a system" and it is by looking to the needs and outcomes expected of the subject tree that you design a guild for that tree and the components of the guild.

Nick Huggins : Great info. Thanks Mark. I'm off to start planting these guilds with my orchard trees.
Posted almost 10 years ago

Grahame Eddy : I have some of those terracotta pipes just waiting for a use. Thanks again Mark!
Posted over 9 years ago
Courses Taught Here!
Project Badges